Trail running is challenging. There are hills and valleys, curves and straightaways, dirt and undergrowth, smooth earth and gravel or roots along the path. There are times when the path is not very clear. Set trails, while usually appearing the same, are always different due to ever changing conditions of weather, seasons and the natural growth of creation.

The theme running throughout the remainder of the Gospel readings assigned for the season of Pentecost center upon the journey of Jesus toward Jerusalem and travel the dusty paths towards the ultimate destination of the reign of God.

Following Jesus on that path is like trail running. There are challenges and hazards, difficulties and dangers. Too often, the temptations of detours and shortcuts offer us avoidances of the way we are called to follow.

Yet, in following Jesus, we are called to a particular way. Before the people of Jesus were called “Christians,” they were self-referenced as “followers of the Way.” That’s a more accurate description of what we are called to be. Rather than a proper noun, we are to be verbal nouns.

That can seem challenging, difficult, dangerous or uncomfortable. Following Jesus can take us places where we don’t want to be: places that are different, with distresses, hurting or hopelessness. We travel a different path than the well-marked, more traveled ways of the world.  The path Jesus traveled took him to the cross- the place where conventional wisdom and the established course directors of the world said “no” to the vision and mission of Jesus. The path he was on crumbled and became a dead end.

Yet, when the ways of the world and humanity said “no” to Jesus, God proclaimed a resounding “Yes.”

Historically, the varying paths of the world, as lush and easy as they appear, have all crumbled. They have no underlying foundation. The path of God, upon which Jesus has led the Way, is ultimately unshakable because the Way we are called to follow has an unshakeable foundation- a foundation that is God’s “Yes” to Jesus which is the very essence of God.

Below is a picture of the altar scape for the season. Thank you for your work Julie Schoville! 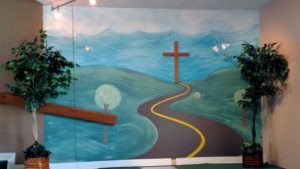