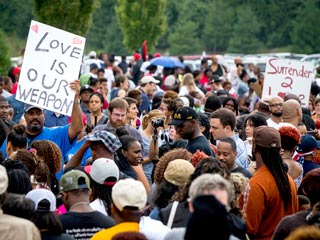 Ferguson, Missouri, after the fatal shooting of an unarmed African-American teenager, Michael Brown. From pbs.org: for more on the local faith response, click the image.

I’m picking up where I left off last week: after the Charleston massacre, considering urgent questions about faith and identity. Then, I shared an exercise on identifying your “social location,” which is no more or less than the story of you and “where you’re at” within society. This exercise changed my life, so I encourage you to try it.

Here’s my social location and what I learned through the exercise.

I’m white, male, middle-class, able-bodied and in good health at age 35. I’m a U.S. citizen by birth, a native English-speaker, with German and English ancestry. I grew up in suburbs in the northeastern U.S., with a younger sister and my mom and dad. My parents are divorced. I’m Protestant by upbringing, Lutheran by choice. I’m college-educated, seminary-trained, and an ordained clergy-person. I’m also married, a father of two, and a homeowner. My commitments to racial equity and economic justice took root while living on the southside of Chicago, while living with people from Nigeria and Tanzinia, and when meeting poor working people in urban Mexico, rural Nicaragua, and urban southern India.

I could say more. (Any one of us could write a book!) But I came to see myself in a new way from even a short description of my social location. In fact, I find it useful to remind myself of the very basics, which are easy to take for granted. Take just the first three. I’m white, male, and middle-class.