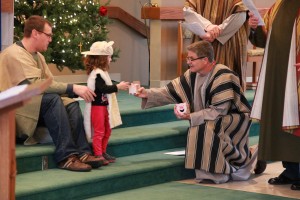 Tom Schoville hands over the offering.

But to be perfectly honest, you might not have predicted it would be. A “Night in Bethlehem” was an All Saints tradition until this year brought something new. And before everyone knew it, a no-rehearsal Christmas Pageant was well underway.

While people arrived for worship on Sunday December 21st, they were shown to the coat racks and coaxed to choose a costume. People were nervous, and uncertain.

But the day seemed to have better plans and as the Christmas Pageant kicked off, you could see the fun and especially joy in people’s faces as they worshipped together in a way they’d never done before. It wasn’t just different because it was un-rehearsed, unpredictable, or simply because it was new. It was different because perhaps for the first time, people weren’t just listening to stories about Jesus’ birth.